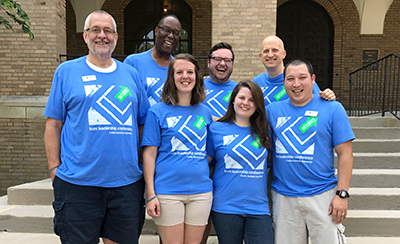 Mel Walker, left, meets with fellow leaders on day one of the Teen Leadership Conference. Walker says, “I’m very thankful to serve with this fantastic team of servant-leaders!”

CLARKS SUMMIT, Pa.—Mel Walker, author of the Next Generation series of books, is a speaker at Clarks Summit University’s Teen Leadership Conference July 17–22 and 24–29. Walker is director of the conference, which the university has hosted annually since 1969 for students entering ninth through 12th grades.

The university says TLC focuses “on challenging students to be influencers in their churches, schools, and communities.” Through this year’s theme, #tlcserves, teens will learn that “genuine influence is being a servant.”

Walker has been involved in TLC nearly every year since he was in high school. “I attended TLC as a student, I served as a counselor during college, I brought high school students from my youth group when I was a youth pastor, I led workshops for teens and youth workers for several years, I served as a main speaker many times, I was also assistant director and then directed TLC in the past, and now God has given me the opportunity to once again direct this amazing program! I am truly honored and humbled to be a part of the lasting legacy of what God has done through TLC.”

Tweet
This entry was posted in Author News and tagged Mel Walker. Bookmark the permalink.