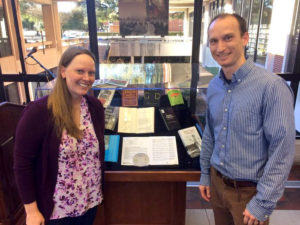 WACO, Texas—Each year the libraries of Baylor University celebrate recent contributions of Baylor’s faculty, graduate students, and staff by displaying entries in the Moody Memorial Library’s Creations@Baylor Exhibit. For the past couple of years, Darren and Emily Roos have showcased their songwriting abilities with songbooks and CDs from RBP’s VBS programs on display at the exhibit. The couple has contributed to the VBS music lineup since 2013.

Darren is a registered piano technician at Baylor University School of Music’s Piano Technical Services. His skills as a problem solver, innovator, and communicator also come in handy in his service as secretary for the Baylor Orators Toastmasters. Emily is director of logistics and finance for the la Madeleine French Country Café Franchise, which has restaurants throughout the Southwest. Emily and Darren have written the following RBP songs:

RBP congratulates Darren and Emily for being chosen to exhibit their work in the Creations@Baylor Exhibit.

Tweet
This entry was posted in Author News and tagged VBS. Bookmark the permalink.