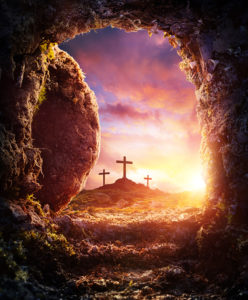 Picture the scene: an empty, uninviting tomb, hewn from the rock. It is utterly dark and dank and desolate. Its only occupant is a bloodied and battered corpse that has been wrapped in cloths and laid on a stone slab. Dead as a doornail. Rigid, lifeless, and unmoving.

No sunlight penetrates the gloom. No, the authorities have seen to that, ordering that the entrance be closed up with a massive seal of solid stone. And so, within the tomb, all is quiet. Not a breath, not a wind, not a whisper. Just darkness and coldness and silence.

Outside the tomb, the world is abuzz. The Sanhedrin are rejoicing: they have conquered their enemy and secured their political power in Israel for generations to come. The prefect is breathing a sigh of relief: another messy uprising averted. The disciples are cowering. Their hearts are filled with dread as they wait, listening for the inevitable sound of soldiers’ footsteps on the street outside. For the disciples, all hope is lost. They had placed their trust and hope in the Nazarene Rabbi, and He had been murdered. How could they have been so wrong?

But within the tomb, nothing is happening at all. No sound. No movement. The air is dank and undisturbed as the corpse of Jesus just lies there, minute after minute, hour after hour. Day passes to night and night to day, but inside those rocky walls all is still. The darkness is all-consuming. The corpse is utterly motionless.

Suddenly there is movement. The heart of Jesus lurches into action. It begins to pump—surreptitiously at first, but then more steadily—once, twice, three times, forcing the crimson liquid of life to flow through formerly closed capillaries. His lungs inflate, drawing in the dank, musty air of the claustrophobic tomb. Now blood is thundering through His veins. His eyes spring open. Two nail-pierced feet slide off the slab and land firmly on the cold stone floor below. He stands, and before His holy gaze the darkness retreats. He strides triumphantly to the door, and the stone is hurled violently away. Nothing can stand before the Son of Man.

The risen Christ emerges from the tomb and steps out into the warm glow of the Jerusalem sunrise. The world has been forever changed. The darkness has been utterly vanquished on this, the holiest of days. The Son rises, and nothing—not even death itself—can withstand Him. Jesus is alive!

From all of us at Regular Baptist Press to our friends, customers, and colleagues, may you have a very happy and blessed Easter! He is risen!