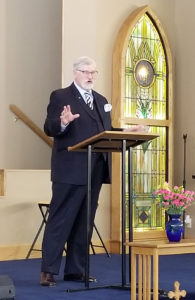 Bauder is research professor of systematic theology at Central Baptist Theological Seminary, author of Baptist Distinctives and New Testament Church Order, coauthor of One in Hope and Doctrine, and a contributing writer in Four Views on the Spectrum of Evangelicalism. He encouraged and enlightened attendees with the theme of Christian unity.

“Demonstrating and defining Christian unity with Biblical mandates and principles, those who came were given much to consider as we strive for Biblical unity as churches of an association and as members of the Body of Christ,” says Shawn Rittmiller, pastor of Park Lane Baptist Church in Omaha.