Children Receive Jesus as Savior at the Evangelistic VBS™ 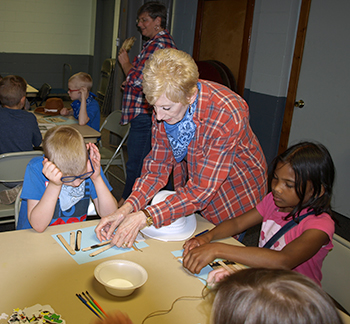 WELLINGTON, Ohio—First Baptist Church hosted local children for VBS June 10–14. They transformed their building into Giddyup Junction, an Old West town, where kids learned about the good news of God’s love—the gospel—going to new frontiers in the book of Acts and how they can take it to new frontiers today.

Pastor Tom Alexander reports kids “loved the western theme” as they earned Gold Nuggets through attendance, bringing their Bibles, quoting memory verses, and bringing visitors. They were able to redeem their Nuggets for western prizes on Friday at the Junction General Store. Games, a craft, and western snacks supplemented the lessons from the book of Acts. 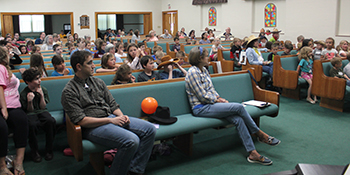 “Parson Dan” Gass shared daily theme-related stories as the children attended the Meetin’ House each morning. Songs, puppets, a missions offering that raised over $915, and an exciting rally rounded out the chapel time. On Friday parents and family members joined the children in the Meetin’ House to enjoy a free picnic. They were also able to witness Pastor Alexander get a pie in his face because the children had met the week’s attendance goal (highest attendance was 137). “Best of all,” he says, “six boys and girls responded to the daily invitation and placed their faith in Christ.”

Meanwhile, three states over (going west) Calvary Baptist Church in Webster City, Iowa, had only a small group of students visit Giddyup Junction (around 35). But the kids had a great time, and the church is rejoicing that 12 of them received Jesus as their Savior.

Regular Baptist Press VBS, the Evangelistic VBS™, is a fully integrated, gospel-centered program that weaves the salvation message into each lesson. “I love working for a nonprofit VBS publisher because God allows me to be a part of pointing people to Jesus in an engaging and winsome way. It’s awesome to know that lives will be impacted all around the world because the gospel is being shared through the curriculum I’m a part of,” says Jon Norris, marketing manager at RBP. Visit the 2020 VBS website to learn more about next year’s exciting, evangelistic program.