Something Worth Remembering, Celebrating, and Treasuring

There’s a fascinating passage in Joshua 4 related to the parting of the Jordan River. The Children of Israel are about to cross the Jordan and enter the Promised Land after multiple decades of expectation and planning. Right in the middle of this event, Joshua issues an odd directive: the people are to take 12 stones out of the midst of the Jordan River and erect them on the land as a permanent memorial to the event.

I’m not sure I would have thought of this. With so much going on, I doubt I would have chosen that time to stop and pick up rocks. But Joshua does so because he knows that on their own the people will not remember what God did for them on that day. After the conquest is completed, they will get busy with the ins and outs of daily life—cultivating livestock, growing crops, raising a family—and over time, the memory of God’s miraculous intervention will fade. So Joshua instructs the people to raise a permanent memorial, because when God intervenes in history in a spectacular way, we need to remember it and remind others about it. 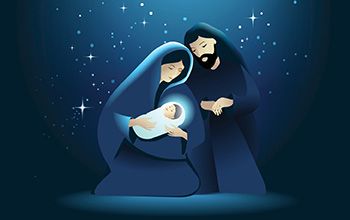 Christmas is a memorial of sorts, isn’t it? That’s why I love the trappings of the Christmas season—the lights, the music, the decorations, the pageantry. These things serve as a visible, tangible reminder that something special has happened. Of course, some Christians don’t see it that way; they have developed an attitude of cynicism, and they like to complain about the way our culture celebrates Christmas. “It’s too commercialized!” they say, or “It’s become too secularized!” Or, if they’re especially Scrooge-like, “The department stores are playing Christmas music way too early!”

I suppose there is probably some truth to these criticisms. But what if, instead of griping about the Christmas season, we viewed it as a memorial—and, therefore, an opportunity? Just think of it: once a year for several months, our entire culture reorients itself around this holiday which is, at its heart, a commemoration of one of the greatest miracles God ever performed in the history of the world. And that presents us with a perfect opportunity to remember and to remind others that “the Word became flesh and dwelt among us, and we beheld His glory” (John 1:14). And that “Christ Jesus came into the world to save sinners” (1 Tim. 1:15). And that “God was in Christ reconciling the world to Himself, not imputing their trespasses to them” (2 Cor. 5:19). That’s worth remembering. And celebrating. And treasuring.

Tweet
This entry was posted in From the Director, Ministry Highlights and tagged Christmas, David Gunn, Memorials. Bookmark the permalink.