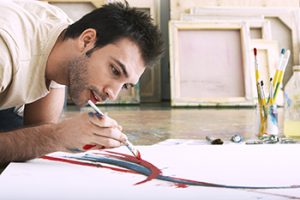 With your black lights, background material (black plastic or cardboard painted black), and glow chalk purchased, you’re ready to take the next step to create Big Fish Bay, with its shops, church, seafood restaurant, harbor master’s office, lighthouse, marina, wharf, and anything else you want to add. Or maybe you’re creating Wonder World Funfest—imagine all those midway lights!

Alisa Greene, wife of Pastor Jimmy Greene at Higher Ground Baptist Church in Lexington, N.C., has been overseeing the creation of glowing VBSes for over 20 years. Here are her suggestions for the work that needs to be accomplished two to three months before VBS.

Have small teams meet once or twice a week to do most of the artistic work. (This team should include people in your church who can draw, paint, or cut cardboard.) If any costumes are needed for VBS, you will want to have someone create them during this time.

Building and props can be made from wood or cardboard. Wood frames work best for providing support for cardboard buildings and stand-up characters. But using cardboard for these, rather than wood, helps with weight and movability.

Which parts of the town and people should glow depends on the colors of chalk and paper you have and the contrast they create. Hint: Avoid putting glow paper on items such as people’s skin and tree bark, so be creative in adding glow items to these. Hint: Glow-on-glow does not work as well as simply black or dark with glow effects. It is not necessary for the entire stage to glow. During the skit or puppet show, you may want to use a spotlight to highlight a special scene or character.

Don’t be afraid to play around with ideas. Each year you will learn new ways to create and enhance your own VBS experience.

As you draw closer to VBS, you will want to include as many people as possible in preparing for VBS. These volunteers usually are willing to give a couple nights a week to come out and fellowship and work on VBS. Alisa tries to discover people’s gifts and invite them to use those gifts in preparing for VBS. For example, she says, “We have some ladies that want to help but might not be able to draw, so we include lots of other needs that they may be able to do—such as cutting, gluing, sewing. I have always felt it was important to engage as many people in VBS as possible.” There is always a place for those who like to prepare meals for workers, which is a great benefit for those who come straight from work. Volunteering to work in the nursery while parents work on the art is another way people can help. This enables parents with young children to contribute to VBS as well.

Alisa suggests, for example, that one classroom (team) might use scrapbooking hole pun 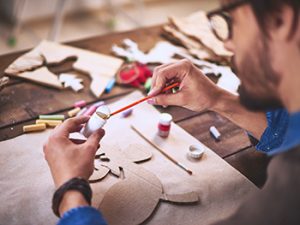 ches (i.e., that make different shapes of holes) to create glow-in-the dark prints to glue onto paper dresses, while another classroom may have people cutting out Bible verses and gluing them onto signs. One classroom might have the messy job of chalking boards or trees to look like wood. Reminder: It is okay—and actually better—to have both glow and non-glow items. You can always accent the non-glow items with glow-in-the-dark accents to make them pop.

This is part 2 of a three-part series, How to Do VBS in the Dark. Read “Glow in VBS: Use Black Lights.” Look next Friday for part 3, “Volunteers Make VBS Glow.”

Tweet
This entry was posted in Vacation Bible School and tagged How to Do VBS in the Dark. Bookmark the permalink.