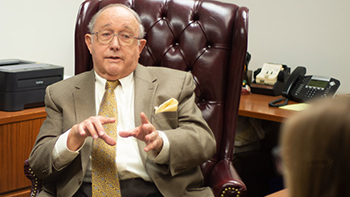 “Dr. Murdoch is the kindest person I have ever met. He takes the time to communicate and help his students,” writes a former student (ratemyprofessors.com).

CEDARVILLE, Ohio—Dr. J. Murray Murdoch announced his retirement as distinguished professor of history and government at Cedarville University. His nearly six-decades-long career with the school began in 1965. The university honored him and his wife, Ruth, in a chapel service on Nov. 18.

Portrait of Obedience, published by RBP, traces Regular Baptist history and its theological roots from the 1930s through the 1970s by looking at the life of an early Regular Baptist leader, Robert T. Ketcham. Dr. Murdoch shows how God used Ketcham’s obedience to help shape Baptist fundamentalism in America. In the book’s preface, Dr. Murdoch wrote,

I determined to write a devotional biography. In no sense is this volume a critical analysis of the man’s theology or his actions. Instead, it is the account of an Allegheny mountain farm boy with a limited education and a severe physical handicap who promised God the only thing he had to offer: obedience. Each experience in Dr. Ketcham’s life reinforced the principle that obedience is all God expects from anyone. The story of Robert Thomas Ketcham is the story of God’s sufficient grace in the life of His obedient servant. Thus, the message of this volume is simple: God rewards obedience.

As a historian, I was captivated by the manner in which Dr. Ketcham’s life was rooted in the history of fundamentalism. In order to portray him correctly, I felt it important to show some of the conflicts within the Northern Baptist Convention. It also seemed necessary to present briefly the development and decline of the Baptist Bible Union, a movement in which Dr. Ketcham was deeply involved. Finally, since in many respects the story of his life is the story of the General Association of Regular Baptist Churches, some history of the Association has also been included. Dr. Ketcham was a vital part of the history of the Baptist fundamentalist movement. He was by no means the only figure, but he was an important figure. His life was devoted to the defense of Biblical Christianity. It is my prayer that this volume might help the reader achieve a more complete understanding of fundamentalism in its historic context.