How Did You VBS This Summer?

Many American churches held a full-blown, in-person VBS this summer for the first time since 2019. For two years, some had held limited versions of VBS, while others canceled it altogether. But now they’re back. How did your church “VBS” this summer? Here are answers from several churches across the US.

A: With exciting themes from RBP. 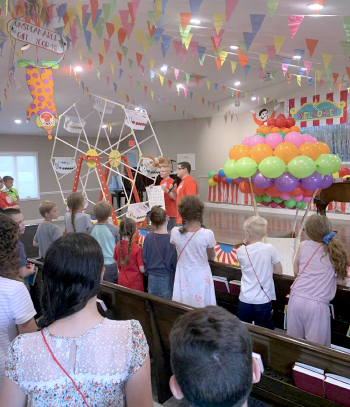 VBS themes influenced churches’ choice of VBS curriculum. Here’s what customers are saying about the 2020 to 2022 themes:

First Baptist Church in Land O Lakes, Florida, bought Wonder World Funfest. Jamie Becker says, “I think we got one of the last kits! We loved the circus theme and the stories on Jesus. It was so much fun to decorate with this theme.” Jamie says the church plans to use Stompers & Chompers next summer, “as we have used RBP for many years.”

COVID kept Linda Maynard’s small, rural church, Smyrna (New York) Baptist, from holding VBS in 2020. This summer they used Big Fish Bay. The VBS week got off to a rocky start, with no electricity in the entire town the first night. But, says Linda, “We had a great week.” Three were saved. And, surprisingly, since the church has no teens, more teens than younger kids attended. 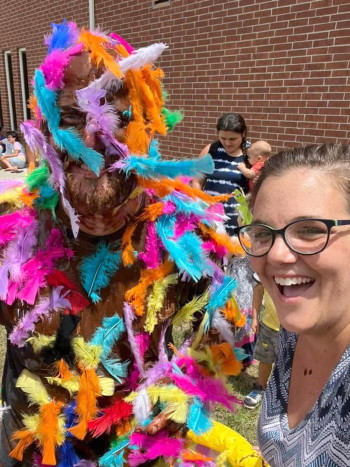 The Kookaburra Coast theme lent itself to an interesting event at Lee’s Summit (Missouri) Bible Church. “We tarred (chocolate sauce) and feathered and shaved the head of our associate pastor [Caleb Calton] for two of our mission penny-drive goals being met!” reports Karen Cantu. “We enjoyed the Kookaburra Coast music and listening to the 150-plus kids belting it out! What a great week of VBS and the opportunity to open up our church to share and live the gospel to everyone who came!”

Livingston Baptist Church in Delco, North Carolina, doesn’t use RBP VBS exclusively and chose Kookaburra Coast for 2022 because the church had never used a similar theme. It is planning to use RBP’s Stompers & Chompers next year.

Christa Bryson reports that Faith Baptist Church in Simpsonville, South Carolina, had a wonderful week using Kookaburra Coast. Many new kids attended, and one made a salvation decision! Christa shares, “I grew up in Australia as a missionary kid and I LOVED this theme. RBP did a great job incorporating some Aussie trivia with a great Gospel emphasis.”

A: With the best decorations ever! 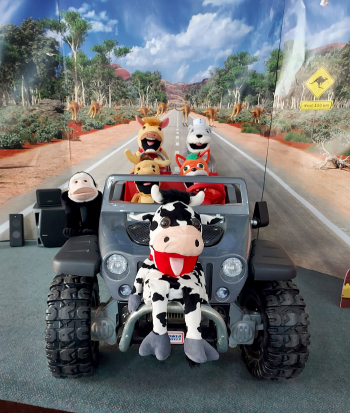 RBP offers a wide range of decorating ideas and supplies, but each church brings its members’ creativity to the fore when they decorate for a VBS theme. For example, Westminster Presbyterian Church in Sarver, Pennsylvania, paired the Kookaburra Coast Theme Setter with an ATV and filled the vehicle with puppets from past VBSes.

RBP offers a Facebook group, RBP VBS Community, to support those using the RBP VBS curriculum. Community members ask questions, discuss VBS, and support others as their churches host VBS. This group is also a great place to get decorating ideas and see photos of what other churches have done. Join the community to view hundreds of photos of decorating that brought Big Fish Bay, Kookaburra Coast, and Wonder World Funfest to vibrant life.

A: With timeless lessons from the Bible!

Sarah Madden, of Friendship Baptist Church in Joaquin, Texas, says her church chose Kookaburra Coast because it was available in the KJV* (as is Stompers & Chompers). When asked what the kids liked best about VBS this year, she answered, “All of it.” And that means the Bible lessons engaged students as they learned about Moses and had “awesome adventures in God’s glory.”

Christa says her church in Simpsonville loved the student worksheets “and the opportunity to send home the gospel every night to reach the parents as well!”

Margaret Tomlinson’s church in Pass Christian, Mississippi, is small. Her church hadn’t had VBS “since Katrina came to visit.” This summer fifteen children attended. She says VBS let “the children in our church know how important they are to us.” The children met together in the sanctuary for the Bible lessons. Margaret says it was a huge blessing to see their excitement as they listened to the Bible lesson each night. She reports that both parents and kids are asking her about next year’s theme.

Puppets add another layer of engagement, learning, and fun to VBS. The scripts always reinforce the Bible lessons and illustrate application of their timeless Biblical truths. And, as with all RBP VBS products, the puppet scripts are flexible. Some churches have a team of puppeteers who speak as well as manipulate the puppets. Other churches, like Donna Brewer’s and Roger Asbery’s, use the CD instead of having the puppeteers do the talking. Donna reports that the kids “loved the puppets!” And still other churches don’t use puppets at all, but have people act the parts, or they use the lesson-related scripts for a goofy character, which are available in the director guide (print) and on the director resources CD (pdf).

RBP’s marketing manager, Jon Norris, wondered how many churches represented by the RBP VBS Community used audio recordings for their puppets (73 percent). Of the 27 percent who use their own voices is Sara’s church in Roland, Oklahoma. “We let our teens do the voices,” she says. “It gives them a way to serve. The teens love doing it, and the kids look forward to doing it when they get older.” 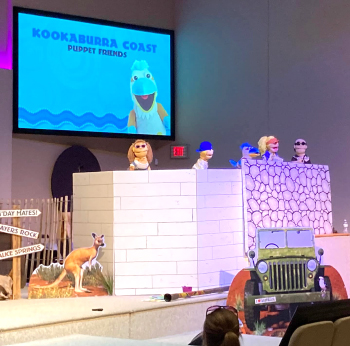 Linda’s church in Smyrna has a missionary come in to do the puppets with help from a couple of church members. Linda says the kids “LOVE the puppets” and that puppets “reinforce the theme and the kids remember.” The church has its own puppet stage, built by a church member several years ago. The church decorates it for each summer’s VBS theme. With so many parents of VBS students unable to work, the church decided not to take an offering. Even with this financial constraint, Smyrna Baptist Church has preordered Stompers & Chompers for VBS 2023!

Sara Rowland’s church, Zion Missionary Baptist Church in Roland, Oklahoma, adds to the puppet scripts available from RBP. First, every summer the church brings back a recurring character, Bubba, whom they write into the script. Sara says that seeing a beloved character from previous years causes students to be more open and attentive. Then the church gives students multiple points of focus, as the puppets are spread out across the stage. 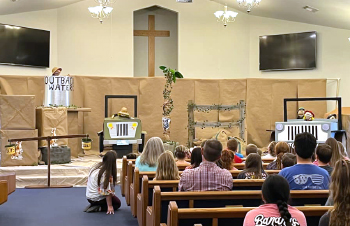 How many puppets do you count?

As Sara explains, “Having a spread-out set grabs their attention and opens the door to presenting the message that we bring through the puppets. It also helps keep their attention because it feeds their need for different things going on.” Sara points out that puppets appeal to all age groups. As far as the effort it takes to have multiple puppet stages, Sara says, first, it communicates to the VBS kids that the church cares; and second, “we are already going to decorate our stage, so we just design it a little differently to allow places for puppets and their handlers.” She concludes, “We enjoy doing the puppets because it gives us one more way to present the message of God, and kids are able to catch certain things within the puppet skit that they would miss in the regular class time, and it is a great way to introduce the daily spiritual thought or goal.”

A: With a missions/ministry emphasis! 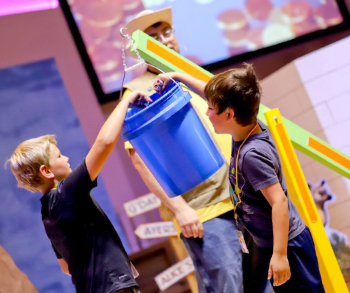 RBP partners with Regular Baptist International to feature a need—usually for kids—in foreign countries. A missions poster, photos and biographies of children, and possible giving goals (and what the amount could buy) are included in the missions emphasis. But many churches collect money for ministries in their area or state. Churches use creative, as well as tried and true, ways to encourage VBS kids to contribute (e.g., boys vs girls).

A: With God-given eternal results!

RBP is the only VBS publisher recommended by Child Evangelism Fellowship. CEF says, “VBS is a great way to reach children with the love and truth of Christ, and RBP does a wonderful job of providing a VBS kit with strong biblical content and a daily presentation of the Gospel.”

Someone in the VBS Community asked if lessons are always from the Old Testament. No. In fact, Wonder World Funfest lessons focused on the life of Christ, which appealed to Jamie, who said, “We loved that the lessons were about Jesus directly.” Kim G Black Vinson, from Grace Bible Fellowship of Hico, Texas, says it doesn’t matter: “I love the RBP—even if Old Testament. EVERY day has the gospel tied into the lesson.”

Davey Ermold, of Blue Ridge Grace Brethren Church, Winchester, Virginia, says, “You never know how many nights a child will be in attendance, and you never know how the Holy Spirit will convict and bring to faith. Present the Gospel every day in every way!”

That daily presentation of the gospel—along with loving VBS staff and much prayer—resulted in a number of salvation decisions this summer. For example, Beth Kirk’s church in Randleman, North Carolina, though founded in the 1970s, had its first VBS this summer. Beth reports the church hadn’t “seen a soul saved in years,” but eight kids believed on Jesus as Savior at VBS. “God’s been good!!” Beth says. Meanwhile, Sybil Wallenbeck reports that 10 children accepted Jesus as their Savior at Calvary Baptist Church in Sedalia, Missouri, during VBS. She says, “PTL. Doesn’t get any better than that.”

A: We’re looking forward to using Stompers & Chompers from RBP!

The consensus among these churches is excitement over next summer’s theme, Stompers & Chompers. Many have already preordered this dinosaur-inspired VBS, including First Baptist Church of Wellington, Ohio. Pastor Alexander won the church a free VBS kit at the 2022 GARBC Conference, and the church has already placed their entire order for VBS 2023!

What makes Stompers & Chompers stand out among VBS themes? Josh Mason, RBP’s creative manager of Vacation Bible School, explains. Stompers & Chompers will pull students in, he says. “Many kids are fascinated with the world of dinosaurs, and this VBS takes them to that exciting world. But it’s more than just a place. It’s full of fun dinosaur characters that students will love to meet! And the dinosaur fun leads into truths from the Bible that will cause kids’ faith in God and His plan to grow. Through RBP’s effective ways of presenting the gospel and Bible lessons, they’ll know and believe that God has a beautiful design for their lives.”

Don’t miss out on next summer’s Stompers & Chompers VBS. Place your preorder today!

*Introductory kits, lesson supplies, and any artwork with Scripture quotations are available in either the KJV or the NKJV.