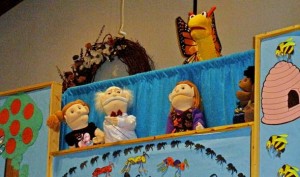 MILFORD, Del.—Puppet burn strikes again: this time at First Baptist Church during their week of VBS. The six-person puppet team practiced several hours each day in the week prior to VBS, which ran August 5–9.

“You really do use a lot of muscles in your arm,” explains Michelle Kramlich, 19, who operated the Bugzi theme puppet this year. “It can be really hard to keep him up and talking the whole time. We call it the puppet burn.”

For at least twenty years, RBP has featured puppets in its VBS curriculum, but this year, to highlight BugZone’s focus on being transformed, the theme puppet is actually two puppets. Starting as a caterpillar puppet, the Bugzi character undergoes a transformation that turns him into a butterfly puppet. 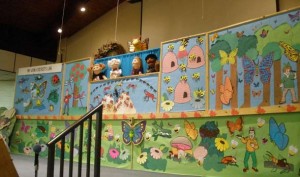 “The kids loved it when Bugzi changed,” says Kramlich, who has been working with puppets for over six years.

“The puppets are always top notch,” says Matt Bowers, VBS Director at First Baptist Church. “Especially this year with the caterpillar that was going through metamorphosis—that was really neat.”

Since Polar Extremes in 2009, the puppet scripts have been written by Todd Liebenow of Creative Ministry Solutions (formerly One Way Street),  a premiere producer in the puppet industry.  In addition to writing, Liebenow assembles a team to record and mix audio tracks for the scripts, complete with character voices, music, and sound effects.

Many churches choose to use the CD provided with the puppet scripts, and First Baptist Church is one of them. Kramlich explained that using the CD protects the puppet team from awkward pauses or having their voices recognized by students who personally know the puppeteers.

“I think the puppets are the things they remember most because those are the fun things,” Kramlich says. “So incorporating the Biblical messages into those things are really the best way to get through to them. To watch a character in the puppet show be transformed or changed by God’s Word—it’s probably the most exciting thing for them, what would get through to them the best.”

First Baptist Church has been using RBP curriculum for as long as Kramlich can recall, and she can remember many of the puppet characters and VBS themes from when she attended VBS as a student.

“We’ve used RBP for a number of years, at least since 2000 for VBS,” says Bowers. “I’ve been impressed over the years with the way RBP is able to take a theme and make it fun for all ages.”

Bowers explained that the church averaged about 150 students each night and saw many decisions, including 11 salvation decisions. “The RBP program has the plan of salvation in there clearly, and it also has a lot of lessons that are geared toward helping the children—those who are already saved—gain new Bible knowledge.”

Tweet
This entry was posted in RBP News and tagged VBS. Bookmark the permalink.