Getting Back To The Fundamentals 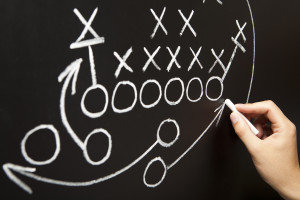 Football coaching great Vince Lombardi, upon introduction to his team—so the story goes—holds out a football and simply states, “This is a football,” and from there reintroduces the team to the fundamentals of the game. His success as head coach for the Green Bay Packers is truly the stuff of legend.

Somewhere at sometime, the word fundamental was hijacked and now carries with it, certainly within secular if not Christian circles, the connotation of extremism or even intolerance. In reality, fundamental is defined as “being an essential part of, a foundation or basis; basic”—nothing threatening or negative there.

Anyone who has ever served in the military remembers going to “basic.” It is where the fundamentals are taught: physical fitness, customs and courtesies, the rudimentary skills of combat and survival. The list goes on. When I entered the Air Force, I learned those “fundamentals” from the very earliest stages of my career. Relying upon those fundamentals was a daily activity until my retirement nearly 22 years later. The constant reaffirming of the basics—the fundamentals—keeps every Soldier, Sailor, Airman, and Marine sharp and prepared. Why should we do or expect anything less when it comes to training and developing ourselves and our children in service for Christ and our walk with Him?

In this age of being sensitive to not offend, people have tended to forget or bypass the fundamentals in an effort to be more accepted and less controversial. Biblical truths have been compromised, and the very foundations of Scripture forsaken. Now, more than ever, it is time to return daily to the fundamentals of what we believe as evangelical Christians and, more specifically, as Baptists.

Recently I assumed the responsibilities of marketing director for Regular Baptist Press. Already familiar with some of the material produced by RBP, as I reviewed product catalogs more intently, I was amazed at the depth and breadth of the material offered. From Sunday School to VBS and devotionals to Bible studies, the quality of the material is truly unparalleled. Why? One word: fundamentals. RBP is committed to ensuring that its material is uncompromisingly Biblical, Christ centered, and outreach focused, with the expressed intent of developing followers of Christ. Whether we are teaching or preaching, leading others, or growing personally, the fundamentals are always foundational.

There is no shortage on the market for Biblically based material. But when considering such material, look deep. Does it stick with the fundamentals? Does it really espouse doctrinal truth, or is it just a veneer covering popular ideas? RBP material can be trusted to be doctrinally sound with no compromise in its Biblical integrity.

We have heard it said, “Together we can accomplish more.” Regular Baptist Press is the publishing arm of the General Association of Regular Baptist Churches. One hundred percent of RBP proceeds go to support Regular Baptist ministries—from providing resources to chaplains and assisting in planting new churches, to translating needed curriculum into national languages. The next time you are considering which material to use, instead of asking, “Why buy RBP?” ask, “Why wouldn’t I buy RBP?” I’m confident your answer will lead you to Regular Baptist Press.