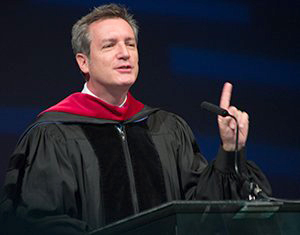 Shirk, who graduated from Summit and earned his DMin from Baptist Bible Seminary, has been pastor of Grace Baptist Church, Batavia, New York, since 1987 and is chairman of Summit University’s board of trustees. He is also author of A Man and His Time and Men at Church and a contributing author in The Pastor: A Guide for God’s Faithful Servant. He gave the keynote address, “The Skill of Finishing,” based on Acts 20:24.

“Dr. Shirk offers our grads a model worthy of imitation,” says Dr. Jim Lytle, president of Summit University. “His skill in helping people understand God’s Word is amazing. . . . Dr. Shirk has used his education well, and his presence should encourage the grads to move ahead, take some risks and maximize what they have learned.”

Dr. Michael Stallard, general editor of Dispensational Understanding of the New Covenant, read Scripture during the ceremony. Stallard is dean and professor at Baptist Bible Seminary. And representing Baptist Bible Seminary graduates, Richard Clark addressed the audience after being awarded his MDiv degree. Clark is pastor of the Tunkhannock, Pennsylvania, campus of Bridgewater Baptist Church, a Regular Baptist church based in Montrose, Pennsylvania, that is receiving assistance from Baptist Builders Club.

“Sixteen years ago my life was changed,” Clark said. “My eternity was changed. My life’s purpose was changed. Not only was I chosen to be His child, but He chose me to serve in pastoral ministry. I knew one of the keys to success was to have a solid education that would give me the necessary tools to have true kingdom impact. I was trained, equipped, and encouraged by godly men. That’s the beauty of the Seminary. It’s not cramming information, but creating learning environments so men can learn and grasp the truth.”

Tweet
This entry was posted in Author News and tagged Don Shirk. Bookmark the permalink.