Early in 2017, Baptist Mid-Mission missionaries Roger and Norene Russ began using the club in their Saturday kids’ program. Right away they began seeing results. “It has been incredible to watch,” Norene wrote in a March 3 email to their supporters. In a three-week period, nine children had accepted Jesus Christ as their Savior. These children began bringing school chums to club, because they wanted their friends to find what they had found in Christ.

One weekend, Roger told Norene to be careful, because the temperature had risen to 103 degrees; Norene remembers the number because that day 103 children attended Kids4Truth Clubs! That day something else happened that was to become a regular occurrence—students approaching her to find out how to be saved. But it began with just one boy: “Madam, I think I’m ready to accept Christ as my Savior,” he told her. Through the work of the Spirit of God using the Word of God, 63 children received Jesus as their Savior in 2017.

Roger and Norene had not expected such a response to God’s Word. “We are blessed beyond measure to see this happen now after all these years here! His Word is powerful . . . always and for every generation!” says Norene. “These young ones will be the future for the church here in the land of the Dagaaba!”

Already, one of the boys who is in the Kids4Truth Clubs Defenders group led his father, Anthony, to the Lord. Anthony told Norene that he had prayed to accept Christ. Norene pressed for details, including whether he had prayed with anyone. Anthony pointed to his teenage son. Both were beaming. 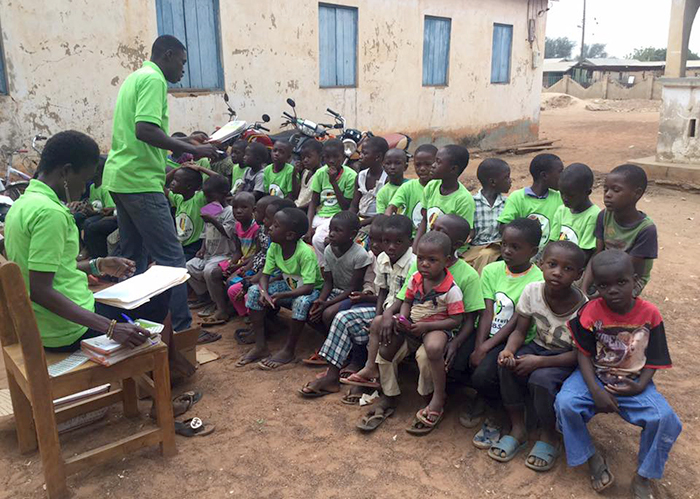 She says she is grateful to Regular Baptist Press for shipping “directly to us here in the Upper West Region, all the way to Lawra!” Normally orders are shipped to Ghana and delivered “right there to Lawra’s post office.” But shipments don’t always arrive where and when they’re supposed to. Back in the States for a brief furlough, Norene worked ahead to prepare memory cards and papers for the beginning of a new quarter. Then after she and Roger returned to Ghana, her sisters and their husbands sent three Priority Mail boxes to them. But one box was lost in transit between Grand Rapids and Lawra. “And of course, the missing box is the one with the first five weeks’ of memory work for the January through March quarter—for all of our Kids4Truth kids,” Norene wrote in October.

Month after month the box did not appear, so Norene had to redo all the work she had done. She prepared for 105 students the first week, but fell short by at least 15, since the clubs now have about 120 students who come regularly, and there are always new kids as well.

With so many children coming to Christ, Norene looked online for a good discipleship study that the Kids4Truth Clubs teachers could use when the clubs weren’t meeting. One of Norene’s contacts was Marrena Ralph, Kids4Truth Clubs specialist. She recommended RBP’s Welcome to the Family! Norene ordered a copy and was so pleased with it that she ordered copies for the teachers and older students as well. “Finding this book is an answer to prayer,” she said.

We praise God for this thriving ministry that actively teaches kids truth! You can strengthen your kids by teaching kids truth with Kids4Truth Clubs. To learn more about the program, check out kids4truth.com or contact Marrena Ralph.

Tweet
This entry was posted in Ministry Highlights. Bookmark the permalink.