Dr. Bauder was invited to speak on independent Baptist fundamentalism. This subset of Christianity had been in the news recently, including CT’s own Dec. 12, 2018, article by Kate Shellnutt.

CT’s associate digital media producer, Morgan Lee, begins the Bauder interview by saying she (and presumably the audience as well) does not understand “where fundamentalism stops and evangelicalism begins,” so she asks Bauder to define each word: independent, Baptist, and fundamentalism. But before Bauder answers, he points out that there is no one independent fundamental Baptist movement: “There always have been competing fundamentalist Baptist movements.” 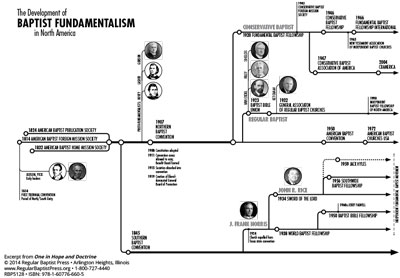 CHART: Download “The Development of Baptist Fundamentalism in North America” for a brief overview of its history and movements.

Bauder and Robert Delnay’s book One in Hope and Doctrine: Origins of Baptist Fundamentalism, 1870–1950 traces these competing movements. The book provides a narrative history, seen through the eyes of two leading characters, Oliver van Osdel and Robert Ketcham.

In the CT interview Bauder points out that there is a “Northern variety” of Baptist fundamentalism and a “Southern variety.” One in Hope and Doctrine introduces the reader to the movers and shakers, noteworthy events, styles of leadership, beliefs, and practices of these two “varieties” and to the variations within each.

Bauder also points out that fundamentalism began as a protest against liberalism. One in Hope in Doctrine personalizes that protest as the reader feels the tension, struggle, and pain of men like Ketcham who fought the hardest but lost within their denominations. Separation was painful, but they separated for the sake of the truth.

CT’s editor in chief, Mark Galli, says there is confusion about fundamentalism and evangelicalism. One in Hope and Doctrine clears up some of that confusion. (A sequel tracing fundamentalism after 1950 could clear up even more.)

Today the word fundamentalism is associated with radical beliefs and practices. Baptist fundamentalism isn’t viewed much better. Find out what it meant to be a fundamentalist back in the day and assess the implications for churches and individuals today. Order a copy of One in Hope and Doctrine.