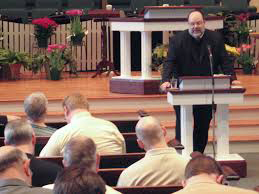 Rockford, Ill.—Dr. Kevin Bauder and Dr. Roy Beacham spoke at the 17th annual Conference on the Church for God’s Glory, hosted by First Baptist Church. Host Pastor David Huffstutler says the goal of the conference is “to help pastors and others rightly handle the word of truth so that their churches will be well-led to glorify God in all that they do.”

He also says that Biblical study leads to dispensational theology and practice. With that in mind, the theme for the 2019 conference was “That God May Be All in All: The Theology and Practice of Dispensationalism.” He invited speakers who, he says, could “simply but soundly tackle this topic.”

Dr. Bauder spoke on the identity of a people of God, addressing the questions What constitutes a people of God? and How many peoples of God will there be? Drawing on a number of texts throughout the Old and New Testaments, Bauder argued that God has a plan for multiple redeemed peoples—including Israel and the church, but also numerous other believing groups from among the nations who will turn in faith to Jesus Christ before the end of all things.

Dr. Beacham spoke on the hermeneutics (the study of the methodological principles of interpretation) of dispensationalism and argued that the dispensational approach to Biblical interpretation arises from the text of Scripture itself, not from an external theological system. This is seen most clearly in Biblical passages that deal with predictive prophecy. The Bible is very clear about predictive prophecy’s purpose, ground, nature, function, and test. Based on these foundational concepts that are clearly communicated in Scripture, the only valid approach to interpreting prophecy is the dispensationalist’s consistent literal-grammatical-historical approach.

Dr. Bauder is research professor of Systematic Theology at Central Baptist Theological Seminary and author of Regular Baptist Books’ Baptist Distinctives and coauthor of One in Hope & Doctrine, a history of Baptist movements in the early twentieth century. Dr. Beacham, who serves as professor of Old Testament Courses at CBTS, contributed to an RBB book that considers three views on the church’s relationship to the New Covenant: Dispensational Understanding of the New Covenant.