Author Learns from Her Own Book, Speaks at Sunshine Baptist Fellowship Meeting

Lakeland, Fla.—In June J. O. and Juanita Purcell were asked to speak at the October meeting of the Florida association of Regular Baptist churches, known as the Sunshine Baptist Fellowship. Juanita put it on her calendar and told Terry Price the title of her session: “Content or Discontent—Which Tent Do You Live In?” But in July Juanita’s life began to take a dramatic turn.

Around Father’s Day two of their sons asked their dad, “Why are you waiting until you can’t do anything to move back to Lakeland? Why don’t you come now while you and Mom still have good strength and energy?”

“We were 82 and 85 and had rich, full lives,” Juanita says. Both were teaching Bible studies three times each week, and Juanita was playing golf two to three times a week.

“August was a strenuous month, living in two houses—cleaning one and packing the other one. We moved our furniture to Lakeland on Sept. 2,” Juanita recalls.

She says that by the time they moved, she was physically and emotionally exhausted. A few days after they were in their new home, she hurt her back unpacking, which added to her problems. “For about three weeks, I felt so empty I could hardly think straight. My life changed overnight when I moved. No Bible studies to teach, no free golf and going out to lunch with my friends, no close friends. Just tons of things to do that I didn’t feel like doing. It was the deepest valley I had ever had to pass through.” 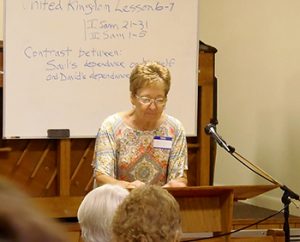 “As I look back on that time in my life,” Juanita says, “I have to say, ‘God has a real sense of humor.’” Near the end of September she was unpacking a box and saw her calendar. “I realized I hadn’t looked at it all month; I had no appointments. I did open it up and flip over to October. Was I ever shocked! On October 14 I was supposed to speak on ‘Content or Discontent—Which Tent Do You Live In?’”

“Oh no! Which file cabinet are my notes in? How am I going to speak on contentment?” wondered Juanita. “I think it was the first time in my life I really felt discontented.”

“I wrote a Bible study years ago titled The Secret of Contentment. I had learned so many great truths on contentment and wanted to share them with others. Thankfully, I found my notes,” she says. “God used those notes on contentment to get my eyes back on the Lord and off of my circumstances.”

Philippians 4:11–13 reminded Juanita that she could be content in every circumstance. When October 14 arrived, she was excited and ready to share with the ladies what God had taught her:

She says, “I got my palms back up and said, ‘Lord, give what You want, take what You want. Whatever.’ I can now thank the Lord for this dark valley. I relearned what it means to be content in whatever situation I am in (Phil. 4:11).”

Juanita has developed these ideas in numerous books, including Facing Your Fears with Faith; Worry-Free Living; Stretch My Faith, Lord; and Forgiveness: A Prescription for Peace. She and J. O. have also written How to Stay Sane When Life Doesn’t Make Sense.