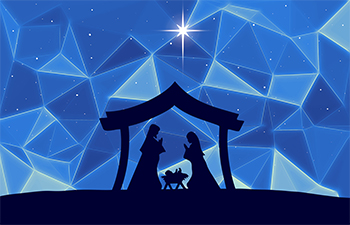 The year is nearly over, and that means Christmas will be upon us soon. I’ve been reflecting on the profundity of that silent, holy night in the little town of Bethlehem. The story is so familiar and the greeting card imagery so ingrained in our collective consciousness that sometimes it’s easy to gloss over the significance of our Savior’s birth.

As God the Son, Jesus was king of the universe. As the chosen son of David, He was the rightful king of Israel. He ought to have been born in a palace; instead, He was born in a barn. There was no plush, gilded cradle prepared to receive His Majesty the King; instead, He was laid down to sleep in an animal’s feeding trough. And no priests or royal courtiers stood by to witness the miracle of His birth; instead, He was surrounded by shepherds (the blue-collar workers of His day) and the sounds and smells of livestock.

In other words, from the very beginning, the circumstances of Christ’s life signaled humility and self-abasement. He came to be the Savior and Redeemer not just of the rich and accomplished, but also of the poor and the outcast. And He willingly set aside the splendor and glory of Heaven—and forewent the riches of earth as well—to accomplish His life-giving, redemptive mission.

It was, apparently, an inauspicious beginning: just a girl, her husband, and a newborn baby shivering in a dark, cold cave. But inside that manger, contained within the child’s flesh and the protective wrappings of the swaddling clothes, were all the hopes and dreams of Adam’s race.

“For God so loved the world that He gave His only begotten Son, that whoever believes in Him should not perish but have everlasting life” (John 3:16).