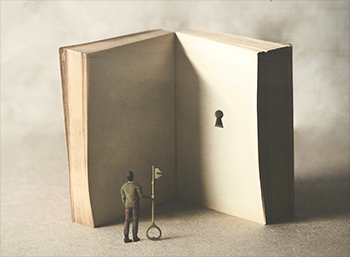 Far too often we like to discuss theology or Christian living without first addressing the more fundamental issue: hermeneutics, the art and science of interpreting the Scriptures.

When Jesus was interrogated on a point of theology (“What shall I do to inherit eternal life?”), He responded with a question of His own: “What is written in the Law? How do you read it?” (Luke 10:26, ESV). The question of how we read Scripture is important, because our theological and practical conclusions will be driven to a large degree by how we read the Word of God. The importance of hermeneutics, then, can scarcely be overstated.

In constitutional law, no less than in Biblical studies, much debate has raged over the question of proper interpretive method. In recent decades there has been a major realignment of American legal thinking as the philosophy of originalism has made major inroads in the courts and law schools. In their book Reading Law, Antonin Scalia and Bryan A. Garner explained the central thrust of originalism this way: “[We] seek a return to the oldest and most commonsensical interpretive principle: In their full context, words mean what they conveyed to reasonable people at the time they were written.” This approach is powerful precisely because it is so commonsensical, and because it safeguards the fixed, objective meaning in written texts. The increasing influence of originalist jurisprudence, I believe, is cause for celebration.

What’s in a Name?

One of the problems that we’ve had as Regular Baptists (and, more broadly, as dispensationalists) is coming up with an adequate label for our hermeneutical approach. Everyone agrees that there is a distinctively dispensational hermeneutic, but we have never settled on a definitive term for it. Charles Ryrie called our approach literal hermeneutics. This label works well enough when it is carefully defined, but it is open to misconstrual, as if it had no way of understanding or recognizing figures of speech in written texts.

The older term for the approach we use was the grammatico-historical method. When I was in Bible college, I learned the related term literal-grammatical-historical hermeneutics. Those expressions do a better job of capturing the distinctives of our approach, but they don’t exactly roll off the tongue.

Other terms, such as normal, customary, or contextual hermeneutics have been floated at various times but have failed to catch on.

I’d like to suggest an alternative. It seems to me that our friends in the legal community have already come up with a perfectly serviceable term to describe what we endeavor to do when we interpret Scripture: originalism. Originalist judges and legal scholars seek to uncover the original meaning of legal texts. Similarly, we seek to uncover the original meaning of Scriptural texts. And we do so by observing certain hermeneutical principles.

Essential Principles for an Originalist Hermeneutic

Biblical interpretation may seem complex and difficult at times, but it is usually simpler than we make it out to be. By my lights, these are the three “golden rules” of hermeneutics: the text means what the author meant; the text means what it says; and the text cannot mean what it never originally meant.

The Text Means What the Author Meant

The meaning of any communicative act is whatever the speaker or author meant to convey by it. We understand this intuitively; it is simply the way that human communication works. When I say to my son, “I want your room cleaned by Friday,” he doesn’t walk away from the conversation wondering how to derive meaning from my words. He doesn’t entertain a lengthy debate over where the locus of meaning should be found, nor does he think he can justifiably reinterpret “Friday” to mean “February” on the grounds that meaning is malleable or certainty is provisional. No, he understands full well that the words mean what I meant them to mean, so he’d better get busy cleaning.

Of course, there are those who question whether this is true. Literary deconstructionists have argued either that words have no meaning or that readers—not authors—are sovereign in determining a text’s meaning. Yet curiously, these thinkers don’t want to be interpreted the way that they interpret others! They want to retain the prerogative of deciding what they mean by the words they speak and write. This points inexorably to the truthfulness of the maxim the text means what the author meant.

The task of hermeneutics, therefore, is an attempt to arrive at a text’s authorial intent, or what is sometimes called the author’s truth-intention. It is therefore vital, whenever we interpret a passage of Scripture, to know as much as possible about the author and, since authors tailor their messages to their intended recipients, about their original audiences. Moses didn’t write the Pentateuch to 21st-century American Christians; he wrote it to a group of recently liberated Israelites as they trudged through the Sinai Peninsula for forty years. Ezekiel was written to Jewish exiles in Babylon. Colossians was written to first-century Christians in Colossae. And understanding something about those audiences’ cultures and thought patterns can be very helpful in our attempt to understand what the Scriptural authors intended to convey.

There is an important corollary to this first axiom called the principle of single meaning. If the meaning of a text is what the author intended to convey to a specific audience, then it follows that any given text of Scripture will only have a single, fixed meaning. So much mischief has been done to the text of Scripture by well-meaning interpreters trying to find hidden meanings or double meanings or secret codes in the text. All those approaches are illegitimate. The text means what the author meant the text to mean to the people to whom it was originally written. Period. Away with the small group Bible studies where the discussion leader reads a verse and then asks everyone, “What does this verse mean to you?” That’s exactly the wrong question to ask. Instead, we should be asking, What did the author intend this verse to mean to the audience he was addressing?

Please note that this doesn’t rule out multiple applications of a text. A text with a single meaning can legitimately be applied in multiple different ways. “Love your neighbor as yourself” has only one singular meaning, but that truth can be applied a whole host of ways, depending on the circumstances individual Christians find themselves in. That’s okay, as long as the application is directly informed by a correct interpretation of the text’s original, single, authorially intended meaning.

So meaning is determined by the author and informed by how he expected his original audience to understand him. But there’s a problem: we don’t have the opportunity (at least not yet) to sit down with Moses, Isaiah, and Paul, and ask them what they meant in this or that passage. So how are we supposed to access the author’s truth-intention? The answer is counterintuitively simple: we read the text.

The Text Means What It Says

By simply reading the text responsibly (i.e., paying attention to things like normal language usage, word meaning, context, and literary genre), we have the means of accurately understanding what an author intended to communicate.

Normal language usage and word meaning. This seems so simple and blindingly obvious that it should go without saying, but in today’s confused hermeneutical climate we are forced to reiterate the fundamentals: The author’s truth-intention is conveyed in the author’s words, so if we simply read his words according to the normal, customary conventions of language, observing the normal rules of grammar and giving words their normal meaning, we have a pretty good chance of understanding the author’s intended meaning correctly. David Cooper put it this way:

When the plain sense of Scripture makes common sense, seek no other sense; therefore, take every word at its primary, ordinary, usual, literal meaning unless the facts of the immediate context, studied in the light of related passages and axiomatic and fundamental truths, indicate clearly otherwise.

This doesn’t rule out phenomena like figures of speech or wordplay; it recognizes and interprets them according to the normal conventions of language usage.

Context. Every text must be interpreted in its context. This is the first and greatest rule in interpretation. Most of the time when a text is misinterpreted, it’s because the reader has ignored or misunderstood the context.

Furthermore, there are both literary and historical contexts to consider. The literary context is the unit of writing in which a passage is found. So we shouldn’t pull a passage out of the middle of, say, 1 John or the book of Acts and try to interpret it without first understanding what is written before and after that passage. Again, this seems simple, but in our sound-bite–driven culture, with bumper stickers, coffee mug slogans, and the attention span of a well-caffeinated mosquito, it’s all too common to see verses wrenched out of their context and consequently misinterpreted. (Curiously, we never do this with other forms of literature. No one opens an Agatha Christie novel to page 284, reads a paragraph in the middle of the page, and tries to make sense of it without first reading the preceding 283 pages. That would be manifestly ridiculous. So why do we do it with the Bible?)

The historical context refers to the time and culture in which a text was written, and the historical occasion that prompted the author to write it. This is where understanding something about the history and culture of the Ancient Near East and Greco-Roman society can be very helpful to the interpretive process.

The Text Cannot Mean What It Never Originally Meant

If an interpretation is proposed that the original author couldn’t have conceivably intended and the original audience couldn’t have conceivably understood, then that proposed interpretation is wrong. King Solomon couldn’t possibly have meant the Song of Songs to be an allegory for Christ and the church, because he’d never heard of Christ and the church and neither had his tenth-century–BC Israelite audience. Or take Romans 1:16, where Paul writes that the gospel is the “power [dunamis] of God for salvation” (Rom. 1:16). Because the English word dynamite is derived from dunamis, sometimes this verse is interpreted to mean that the gospel is “just as powerful as dynamite.” But Paul couldn’t possibly have intended that connection, since dynamite wasn’t invented until 1,800 years after he wrote the verse! Nor is it possible for “my people” in 2 Chronicles 7:14 to refer to the church of Jesus Christ, or for “their land” to refer to the United States of America, since the original recipients of 2 Chronicles had never heard of the church or America.

On this point he is wrong. It sounds very noble and reverent and Christ-exalting, but the original audience couldn’t have possibly understood the Old Testament that way, so that can’t be the way God intended for it to be understood. After all, it was His intention in revealing the Scripture to communicate, not to obfuscate.

In this article, we have only just scratched the surface of this important topic. Future installments in this series will examine the importance of originalist hermeneutics, common objections to this way of hermeneutical thinking, and problematic alternative approaches on the market today. I am convinced that among the church’s very greatest needs today is the need for a sound, originalist hermeneutic. May God grant us a revolution of originalist interpretive thinking so that we might continually seek to understand the Scriptures, and, in so doing, to know the One Who inspired them.

David Gunn is director of Regular Baptist Press. This article is from the November/December 2019 issue of the Baptist Bulletin.

Tweet
This entry was posted in Commentary, From the Director and tagged Why Originalism?. Bookmark the permalink.