In September Regular Baptist Ministries announced the appointment of David Gunn as director of Regular Baptist Press. Gunn had joined the RBP staff in 2014 as editorial director of publications and managing editor of the Baptist Bulletin. He comes to his new position well equipped to lead the press. 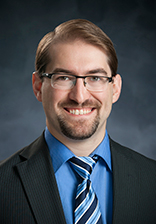 David was ordained for the gospel ministry in 2011 by Grace Baptist Church, Redding, California. Blessed with musical abilities, he served as a minister of music in several Baptist churches prior to his tenure with RBP.

As a teacher, David has taught in his local church and in Pennsylvania public schools as a substitute. He is adjunct professor of apologetics courses at Clarks Summit University and Bible and theology courses at Shasta Bible College and Graduate School. David also speaks at Regular Baptist Ministries’ Stronger Church conferences, in GARBC conference workshops, and online via the Regular Baptist Web Community.

David wrote “Overview of New Covenant Passages, Ostensible and Actual” in An Introduction to the New Covenant, edited by Christopher Cone (Tyndale Seminary Press, 2013) and “Understanding Islam, Reaching Muslims” in RBP’s adult Bible study Current Culture: A Biblical Understanding and Response. He writes often for the Baptist Bulletin. His writing is insightful, clear, and cogent, as well as Biblical.

A self-proclaimed theology junkie, David has immersed himself in theology: studying it, teaching it, presenting it, and writing about it. He was a student member of the Evangelical Theological Society and is a member of the Council on Dispensational Hermeneutics. Along with theology, David is passionate about apologetics and engaging culture from a Biblical worldview. His passion has translated into articles in both the digital and print editions of the Baptist Bulletin and in the social commentary section of GARBC.org. David is a founding member of the 1024 Project, a collaboration of Christian leaders and thinkers who “spur one another on toward love and good deeds” (Heb. 10:24, NIV) by providing encouraging and edifying resources on issues that affect believers both individually and corporately.

GARBC National Representative John Greening officially installed Gunn to his new position during a chapel service at the Ministry Resource Center. Greening, explaining that he has a list of projects he hopes to accomplish before he retires, shared that finding a new director of RBP to ensure its ongoing stability was one of those projects.

Greening sought input from the Council of Eighteen and then started looking for a new director. After a rigorous vetting process and considerable prayer, Gunn was appointed. “We have all come to respect David for his scholarship, work ethic, technical skills, multitasking, commitment to the Word, and his competency in communication,” Greening told the staff. “We have also recognized he is a team player with a godly manner. And the icing on the cake, he even has a sense of humor.”

David then spoke to the staff on Biblical servant leadership, something the staff had already seen him demonstrate as an editorial director and managing editor. Throughout human history, says David, the standard approach to leadership has tended to be heavy-handed, self-serving, domineering, and authoritarian. Jesus repudiated this approach in no uncertain terms: “It shall not be so among you,” He said. “But whoever desires to become great among you, let him be your servant” (Matt. 20:26–27). I’m convinced, both by this passage and by Christ’s example, that the only approach to organizational leadership Christians should ever even consider is servant leadership. This is especially true in Christian ministry. Leaders in churches and parachurch organizations should never be motivated by a desire to see their own visions and agendas implemented; rather, they should constantly be asking themselves, How can I lead in such a way that I maximally serve the Lord, the church, and the world around me?

In his role as director of RBP, David is responsible for providing administrative oversight, charting a course for the future, ensuring fidelity to the GARBC’s doctrinal distinctives, and representing the ministry to churches and parachurch organizations. David points out that publishing ministries and Christian education ministries are a dime a dozen. But, he says, RBP’s settled and unswerving commitment to the glory and majesty of Jesus Christ, the supreme authority of the Scriptures, and the centrality of the local church is what sets it apart. “We don’t want to be viewed merely as a resource provider or a team of content specialists; rather, we want local churches to see us as a ministry partner who will come alongside them and, with uncompromising allegiance and deference to the Word of God, help them guide their church family toward greater spiritual maturity, to the glory and honor of Christ. That’s the kind of Christian education ministry that gets my blood flowing, and by God’s grace it’s the kind of Christian education ministry that I’m privileged to be a part of.”

Keep up-to-date with David Gunn and RBP at RegularBaptistPress.org/director.

On that page he will share his musings about theology, ministry, and Christian education. His insights will enhance your understanding of ministry and equip you to be more effective as you teach the Bible in your local church.

Tweet
This entry was posted in From the Director, Ministry Highlights, RBP News and tagged RBP Director. Bookmark the permalink.