Kids4Truth Clubs around the world are wrapping up the clubs year with award ceremonies. Here’s a look at three. 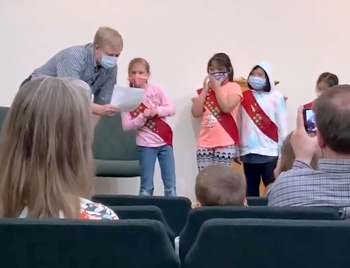 First Baptist Church in Marshall, Minn., has had two unique years of clubs due to COVID—as have many other churches. The Kids4Truth Clubs award ceremony was canceled in 2020, so students received two years’ worth of awards this year. Director Mike Hulsizer describes the year as unique, challenging, and rewarding.

“Once we were able to get together we had a highly modified club from what we’ve done in the past,” Mike explains, adding, “Lord willing we will return to normal this fall.”  This year’s club attendance was more consistent than usual, which Mike attributes to kids staying healthier because of distance learning for school and the cancellation of many after-school activities.

Kids who came to club wore masks and stayed six feet apart, which meant they couldn’t gather in small classrooms. “We kept things in larger groups, concentrating on the group message and Bible memorization. We had to modify what constituted our awards with the shortened and modified club years, along with no touching.  We’re thankful K4T allows such flexibility,” Mike says.

For the award ceremony, all but two kids attended, and 55 awards were presented. “Then for whatever reason we had more parents attend than normal. We have a large number of families where English is a second language. Because so many came to award night this year, Pastor [Nathan Delich] quickly set up an interpreter to translate during the challenge portion of the night. A nice problem to have.”

While the teachers and workers don’t see many professions of faith during clubs time—time is short and lots is happening—they hear about such decisions later. Mike says Kids4Truth Clubs is an important ministry that’s planting seeds as children hide God’s Word in their hearts. 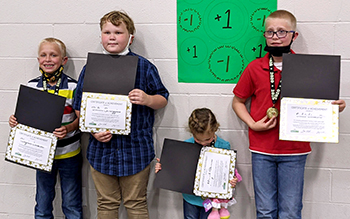 In Alton, Ill., the Brown Street Kids receive a medal to commemorate the oddity of the 2020-21 COVID season. Eighteen kids received certificates recognizing “Amazing participation during a really weird year!”

The Brown Street Kids leaders at Brown Street Baptist Church in Alton, Ill., adjusted their normal midweek children’s ministry to include Kids4Truth Clubs material as the ministry moved from in-person to online. Carrie McFall reports, “We used RBP Kids4Truth material because it covers basic Bible doctrine children need for a strong spiritual foundation and everyone learns the same content scaled to their learning level.” The BSK ministry leaders and teen helpers created weekly 15-minute videos that brought a lesson, games, and team excitement to families’ screens at home. By hosting the video on Facebook, where posting/commenting could be used, the leaders encouraged kids’ interaction. “Additionally,” says Carrie, “the videos let us travel the world, visiting our supported missionaries with a short clip that introduced them, the country, its people, the ministry there, prayer requests, etc.” Carrie says that attending club online at home called for strong parental involvement, which was an unintended benefit as they learned along with their kids.

In February, clubs were able to be held in person again. Carrie shares, “I cannot tell you how much those kids loved seeing each other in person and interacting through lessons, verses, and games. 2020–21 was a season of trial and error, stretching and gaining new ministry skills, and remembering that God is sovereign no matter the circumstances.”

In spite of the ups and downs of the club year, 13 children received awards at this year’s award ceremony. 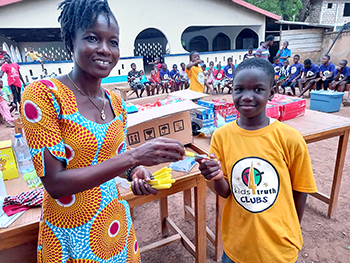 In Ghana, a ballpoint pen or mechanical pencil makes a welcome award for accomplishments in Kids4Truth Clubs.

At Lawra Regular Baptist Church in Ghana, the Kids4Truth Clubs run the same time as the district’s school terms, or every 13 to 15 weeks. The children complete one doctrinal truth during a school term, and each term ends with awards. The awards vary from term to term. This term, 89 children received a mechanical pencil; 81, a ballpoint pen; 52 were awarded a writing book; 77 earned washing powder; and all received toothpaste as a bonus award. Thirty-two kids qualified for the Prestige Award and received a pack of spaghetti.

Director Stephen Naab reports that the clubs sometimes had as many as 150 children attending, with 60 receiving Jesus Christ as their Savior.

A highlight of the year was when Matilda, a young girl with a hole in her heart, believed on Jesus as her Savior on March 6, Ghana’s Independence Day, providing her with independence from sin and condemnation. Seeing children believe on Jesus “gives us so much satisfaction in the work we accepted to do in God’s vineyard,” Stephen says.