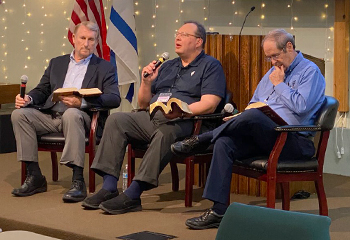 Dr. Mike Stallard, right, participates in a panel discussion at the 2021 Prophecy Conference at Grace Bible Church in Portage, Wisconsin.

PORTAGE, Wis.—Dr. Mike Stallard was a guest speaker at the 2021 Prophecy Conference hosted by Grace Bible Church. Preaching on Sunday, he said his favorite Bible verse, Revelation 21:4, is God’s greatest promise. He explained that statement while preaching on verse 4, its context, and God’s forever kingdom.

Listen to the Prophecy Conference audio.

Rev. 21:1–8 through the Eyes of a  Dispensationalist

Though some premillennial dispensationalists view Revelation 21 as describing the Millennium, Stallard views Revelation 21 as a description of the eternal state. He calls the Millennium the kick-off party for God’s forever kingdom. “We’re going to have a thousand-year celebration,” he says. In the eternal state, God will change His address from Heaven to Earth, and believers will experience God’s full presence, which is necessary to remove the curse: “The closeness of our relationship and the presence of God removes the curse. And I want you to know, that’s more than Adam and Eve ever had. They had bodies that could sin; they had bodies that could die. You and I are going to have bodies that can’t sin and bodies that can’t die. And we’re going to experience the full presence of God, I think, beyond what they even experienced in the Garden before the Fall.” Then he asked what things won’t be in God’s kingdom. He answered truthfully with humorous answers as well as serious ones. “You can take it to the bank,” he said, “God’s greatest promise will be fulfilled.”

Stallard told the conference he wished God would hit the fast-forward button and get us to the eternal state and removal of the curse now, but, he reminded, there will be at least 1,007 years between now and then. He closed with these encouraging words: “Just trust the Lord and live in joy.” He also reminded everyone that all Christians need to take seriously the commands of Christ to share the faith and let people know there is a Heaven to desire and a Hell to shun.

Tweet
This entry was posted in Author News and tagged Dispensationalism, Mike Stallard. Bookmark the permalink.