It’s fall—almost! Vacations are, for the most part, over. Kids, also for the most part, are back in school. And Vacation Bible School 2021 is a wrap. Churches around the country are praising God for the way He worked during their VBSes this summer.

To say that COVID-19 affected VBS is to state the obvious. But it’s worth noting anyway.

First, many churches purchased Big Fish Bay: Hooked on God’s Mercy, expecting to hold VBS the summer of 2020. And then the shut-downs. While a few churches held VBS virtually, most had to postpone it and pray for better days in 2021.

Third, no matter which theme churches used, they report having a good turnout this summer. Kids who were tired of being shut in or restricted or doing school virtually were happy to get out and go to VBS in person. For example, Miranda Lynn of Johnstown (Ohio) Independent Baptist Church, reports, “Ended up with 116 kids our first night! It was our best first night EVER!!”

We chose the bay! 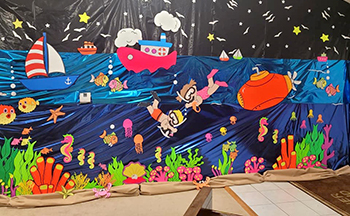 Churches who had already purchased Big Fish Bay were pretty much locked in to going to the bay for VBS. Kids enjoyed a nautical theme where they explored an exciting bay, fished off a pier, or ventured out to sea. Churches decorated with a lighthouse, tall ships, and coastal animals. But most importantly, kids embarked on a journey into the life of Jonah. Through him they encountered God’s mercy and saw how His compassionate heart was most fully expressed in Jesus’ death and resurrection.

Scott Drinkwater, of Grace Baptist Church in Waynesboro, Pennsylvania, reports, “We had an incredible week. I am thrilled to say that God rescued 11 children this week!” and Ashley Cassidy says, “We had a great week at Holly Hills Baptist Church [Powhatan, Virginia]. Praising the Lord for three precious souls saved in Big Fish Bay VBS! To God be the glory!” These are but two of the reports of children believing on Christ as Savior at VBS. And, even though RBP VBS is the evangelistic VBS, saved children were encouraged to follow God’s direction, look to Him for rescue, share His compassion, choose what He wants, and trust in Jesus’ work. Many churches experienced what Maureen Grimes Black of Kolmont Community Church in Grimes, Ohio, calls “a huge success” when they used Big Fish Bay and studied Jonah in VBS.

We chose the fair! 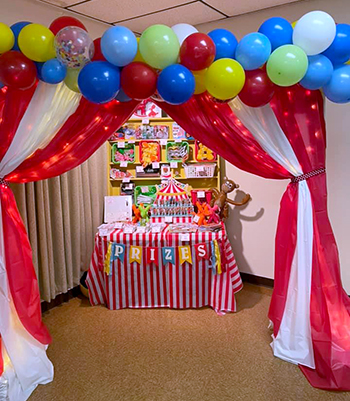 Other churches, however, chose to go to the fair. With this fair theme, kids experienced a bustling fairground, carnival activities, and extraordinary exhibits. This theme was popular with families, with one church reporting, “It was AMAZING!! We had such a fun time and loved this theme so much! 2 years ago there were no children in our once thriving church but by God’s grace, we had an average of 60+ children in attendance each night!! Several parents stayed for adult Bible study too!” (Amanda Harvell of Oak Ridge Baptist Church in Concord, North Carolina).

In the lessons, students learned about the Bible’s revelation of Jesus long before He came to earth and about events of His earthly ministry. In addition to hearing the gospel again and again, students learned they should be confident that Jesus Christ is the long-awaited Savior, choose to make Him Lord of their lives, realize that He alone satisfies spiritual hunger, turn to the answers Jesus has provided in God’s Word, and share the hope of the gospel with others. Jenn Hernandez of Valley Evangelical Free Church in Hemet County, California, reports the kids “had a blast! The most important part was what they were learning in the midst of all the fun. It was so awesome to watch as these kids were reciting back memory verses and retelling the miracles of Jesus.” Other churches, too, report that children made salvation decisions during Wonder World Funfest.

Yes, it is fall. Tourist season is over at Big Fish Bay, and the gates have closed at Wonder World Funfest—VBS has ended for another year. But that doesn’t mean the effectiveness of VBS has ended. Regular Baptist Press offers ideas for making the most of VBS 2021 until it’s time for VBS 2022!